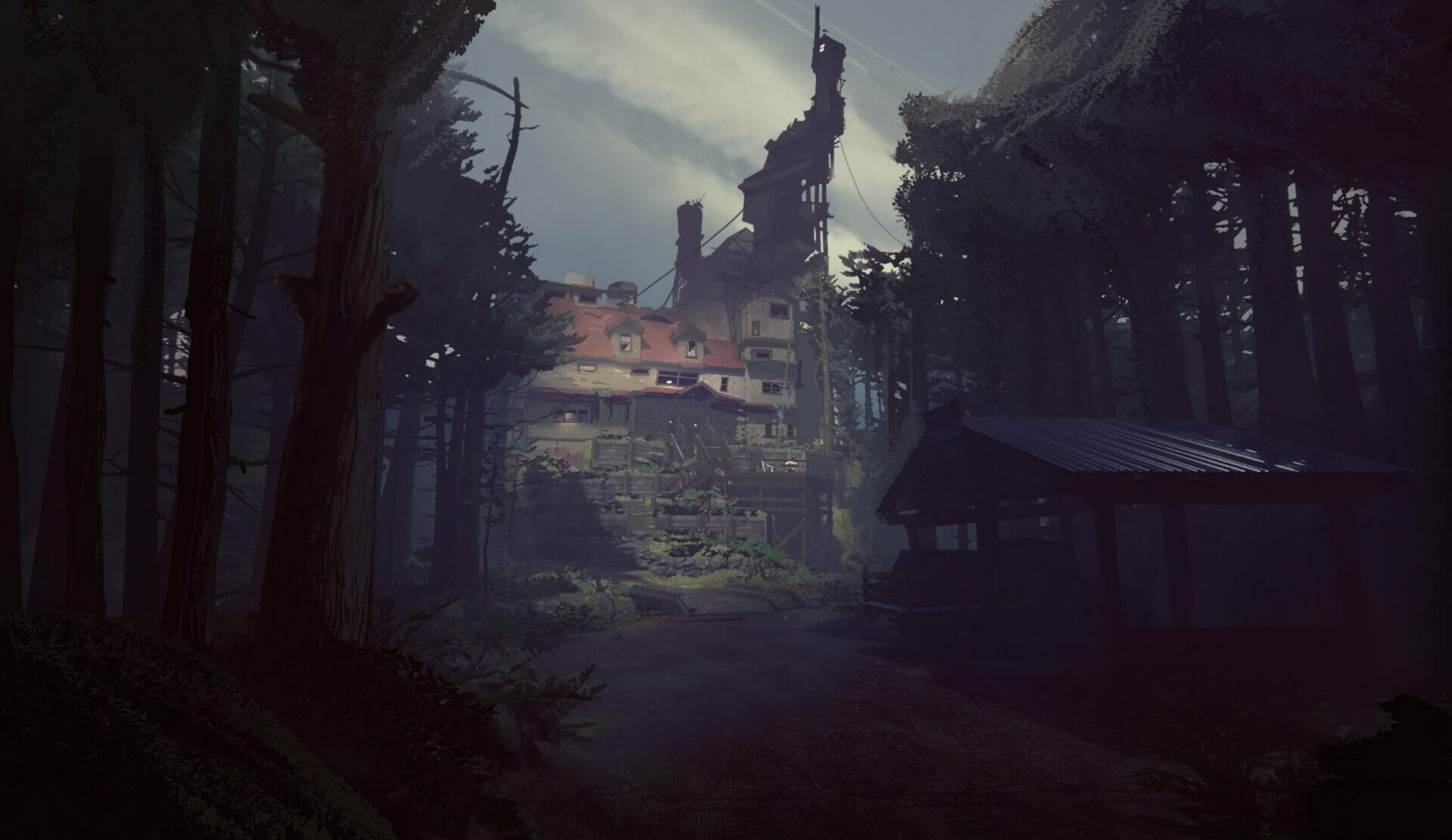 A boat moves through a rugged, wooded coast. Onboard, two hands hold a bouquet and an old yellowish notebook, titled Edith Finch. The book opens and a small pen sketch of a house welcomes the reader. Just below, some sentences seem to have been hastily deleted. A female voice reads out the first lines. A blinding glare reveals a path, a forest, and the strange silhouette of a house in the distance.

A lot of this isn’t going to make sense to you, and I’m sorry about that. I’m just going to start at the beginning, with the house.

What Remains of Edith Finch was developed by Giant Sparrow (The Unfinished Swan) and published by Annapurna Interactive (Ashen, Gone Home, Journey). It is a first-person adventure independent game released in April 2017. The title presents itself as a big flashback, immersing the player into the diary of the titular Edith Finch; where she recounts her return to her now desolate childhood home. The player will impersonate Edith as she investigates her family’s past as well as her own.

In her will my mother left me a key but didn’t tell me what it unlocked. Maybe she thought I’d know. Or she thought the mystery would be enough to bring me back.

The gameplay is punctuated by Edith’s thoughts, which accompany the player by describing objects or commenting on a memory. The same thoughts appear written in the game world, physically interacting with it. Edith’s words literally lean on walls and objects; sometimes moving slowly to lead the player into new places. The game is clearly inspired by other investigative titles with this type of mechanics, the most notable one being The Vanishing of Ethan Carter.

The truth is, even after I inherited the house, I never thought I’d come back to it. But now I had questions about my family that only the house knew the answers to.

The main menu provides the first important plot element: A family tree drawn by Edith in her notebook. All the names of her family members have both birth date and death date written underneath.

This disturbing premise precedes the exploration of the Finch House, where most of the game will take place. The house is built on a cliff, overlooking the sea. Far from civilization, which manifests itself as some distant light. The structure of the house itself seems to challenge gravity; wooden structures that increase in height give the house a surreal shape.

The ambiance is that of a lived-in, untidy, and dusty house, that remains true and familiar. Piles of books scattered around, boxes and packages here and there, dirty dishes set on the table, an open cookbook on the counter. You have the perennial expectation to meet someone at any moment, someone still wandering in the quiet corridors of the house.

The controls don’t include a command for running, but it isn’t necessary because the game invites you to take it slow. The scenography is detailed and carefully curated. Thanks to this environmental storytelling the game world shows the context and fundamental aspects of the Finch’s story.

For the first time in years I felt like I was home. But instead of a family, there were just memories of one.

The first strange feature of the house is noticeable as soon as you enter. Each door leading to the bedrooms of each family member is sealed with insulating foam and an ornamented wooden board.

The player quickly learns the reason for those strange structures on top of the house. On the death of every family member, the Finches sealed the door of the deceased’s room, leaving everything inside as it was. Space began to run out over the years, so the house began growing in height by building more rooms.

As a kid I just assumed every house had peepholes and sealed rooms you weren’t allowed inside of.

Edie (Edith’s grandmother) drilled through each sealed door and installed peepholes into the rooms. She then fixed a metal plate with the name of the owner accompanied by their date of birth and death. Grandma Edie transformed the Finch House into a sort of family museum, perhaps with the intention of keeping their memory alive.

I think we’ve been surrounded by death for so long we’ve just gotten used to it. What kind of family finishes building a cemetery before starting the house?

Edith’s visit is meant to shed light on what seems to be a family curse that has haunted the Finch family for generations. The narrative is not grotesque and black humor such as, for example, in A Series of Unfortunate Events. The atmosphere in What Remains of Edith Finch is soft and relaxed, something between the nostalgia and melancholy of a girl who wants to learn what she could not understand as a child.

The only thing to do then is to learn about every family member who lived in the house. To discover how they lived and, above all, how they died.

Lewis told me there were secret passages but I never believed him. Turns out, my mom was really good at keeping secrets.

It is at this point that the title shows off all the care put into level design: secret passages, which branch off from one room to another, will allow Edith to access the rooms.

Now it was time to find out what my mom had been afraid of.

While exploring the rooms, Edith comes across elements telling the life of those who lived there. All the exploration converges into a single element: the moment of their death. It will be enough to find and observe it to be instantly catapulted at that very moment, playing the protagonist of that story, and living his last moments in the first person.

The player is forced to control that character and be the author of their death. These are tragic deaths, almost absurd, but in any case conditioned by the actions of the family members themselves, who were the architects of their own destiny. Their actions had consequences, however unfortunate.

The game manages to differentiate the type of narration. Sometimes it ops for a dramatic and raw approach. At other times, however, when the tragedy is too strong to swallow, it changes into a dreamlike atmosphere that is rich in symbolism, which leaves room for interpretation.

The story is tragic, but the player can accept it and process it. It has ups and downs of contrasting emotions which in the end move towards melancholy but it crosses a much deeper range of emotions than simple sadness. The interaction is minimal but perfectly dosed. There is no inventory or HUD. Paradoxically, for a game where the interaction is very limited, everything revolves around it. An inattentive player might describe What Remains of Edith Finch as a simple walking simulator. That would be criminally reductive because it would not emphasize the solutions adopted to tell its story.

If there’s a pattern in all these stories, I think it’s that none of us has gotten very far.

Specific storytelling methods are always different and reinterpreted into the videogame medium: a comic book, a story in a diary, a series of photographs, a report of a psychiatrist, a poem, a letter of divorce, even a video game itself. A family member for each room, a story for each family member, a different language for each story. All with the same conclusion.

What Remains of Edith Finch?

Throughout the story, the player accompanies Edith on a journey back in time, deeper and deeper into the memory of her family. What Remains of Edith Finch is a nostalgic story that speaks from the present to the past.

The player doesn’t feel oppressed even though the game is enclosed by the four walls of the house. The title detaches itself from an intimate theme and raises itself to a broad view on life, time, and death. What Remains of Edith Finch teaches players that, as incomprehensible as it may seem, their fate is sealed from birth. The most important thing is thus to appreciate their time in the best possible way.

After all, we’re all tenants of that strange house in the woods, overlooking the sea. We’re all Finches. But if death can’t be avoided, life can be lived.

If we lived forever, maybe we’d have time to understand things. But as it is, I think the best we can do is trying to open our eyes, and appreciate how strange and brief all of this is.