The core of the Hypercritic foundation is the idea of change. In the chaotic aftermath of the pandemic, the Japanese concepts of Monozukuri and Mu offer a new perspective on how to lead change in a sustainable direction if combined with a disruptive narrative.

Storytelling is a democratic, economic and peaceful way to inspire change, more effective than violence and even law. More than people, nations, and even buildings, stories are artifacts that can survive human entropy and travel far away in time and space while preserving their essence. Whether it be a handbook of an entire civilization like Homer’s Iliad and Odyssey, a guide to the afterlife like Dante’s Divine Comedy, or the general catalog of human nature, like Shakespeare’s corpus of tragedies and comedies, stories are the shared attempt of humanity to witness, represent, and find meaning in life. Therefore, the art of telling stories is not abstract or detached from reality, but it’s a practical way to change the world and build the ability and preconditions to generate change.

Monozukuri as a sense-making way of behaving

One way of synthesizing the craftsmanship and dedication required to create a work of art is the Japanese concept of monozukuri (written as 物作り, or as ものづくり) which means to make (zukuri) things (mono) and is the Japanese term for manufacturing. The broader meaning encompasses a synthesis of technological prowess, know-how, and spirit of Japan’s manufacturing practices. The core values include a sincere attitude towards production with pride, skill, care, dedication, and the pursuit of innovation and perfection. It requires creative minds and is often related to craftsmanship, patience, and lengthy, careful apprenticeship practice.

Monozukuri is more a philosophy rather than a technique or method. It is a buzzword in Japan, and many Japanese people believe that has it led Japan to a dominant position in the world market.

In 1998, the Japanese Prime Minister’s Office set up a “monozukuri kondankai (consultative council on monozukuri)” and enacted the Basic Law for Promoting Monozukuri Foundation Technology. Its purpose was to reverse the de-industrialization trend and hollow out what Japan was experiencing after the end of the Japanese financial bubble in the 1990s, by reaffirming Japan’s strengths in manufacturing.

Since the Paris Agreement in 2015, at the global level, there have been efforts addressing Climate Change and the other Sustainability Development Goals (SDGs). According to the last UN Assessment Report on Climate Change (2021), despite those efforts, nobody will reach any objectives within 2030.

According to the U.S. Bureau of Labor Statistics, 4 million Americans quit their jobs in July 2021. Resignations peaked in April and have remained abnormally high for several months, with a record-breaking 10.9 million open positions at the end of July. Ian Cook from Harvard Business Review led an in-depth analysis of more than 9 million employee records from more than 4,000 companies to explore who has been driving this recent shift. Among the insights raised, on one side, is the big issue for employers on how to continue to run their activities, and on the other side a new common trend to look for sense-making jobs more than just technical roles based on hard skills, which is still what most key players demand.

The political value of Ozu’s cinema

The philosophical concept of Monotsukuri can revitalize work ethic and ownership. Japanese director Yasyujiro Ozu used to control every aspect of production, carefully redesigning reality as a domestic, Mondrianesque diorama. Like a careful artisan and demiurge, he is giving shape to a quiet universe of feelings and impermanence in his cinematic art, where objects and spaces witness our brief passage into this world. Ozu is revered as the cantor of Japanese nostalgia, and his world is a place that resembles paradise, in the words of admirers like Wim Wenders.

Looking closer, in this apparent stillness lies the spark of a revolution that anticipates contemporary struggles. Ozu, never married, is a feminist, like Kenji Mizoguchi, the other Japanese director who told iconic stories of oppressed and suffering women. In Ozu’s stories, men preserve tradition and replicate old schemes. Women, such as Noriko Somiya in Late Spring or Noriko Hirayama in Tokyo Story – both played by Ozu’s muse Setsuko Hara – want to break the rules and ask for recognition and freedom and the right of self-determination without discrimination.

What is unique about Ozu is that these individual revolutions are peaceful. They break the old schemes without violence being deployed, to preserve human and family relations. These women keep caring for their parents, even in the presence of a radical divergence, even if they are not their biological parents like in Tokyo Story. Like Ryosuke Hamaguchi’s Drive my Car or Hirokazu Kore’eda’s Shoplifters, Ozu’s movies resonate at the opposite poles of recent variations on the same theme.

Titane by 2021 Palme d’Or winner Julia Ducournau explores the conflict between relations and independence, identity, rebellion, and ultimately the freedom of being whoever one wants to be but in a highly violent way that traumatizes the audience deliberately. Pursuing a radical change without violence or vengeance is more complex: it means embracing diversity and ambiguity, pursuing dialogue and patience, no matter what. Promising Young Woman by Emerald Fennel, who won the Academy Award for Best Screenplay, portrays a society where all men are rapists or potential rapists and assassins, or, in the best-case scenario, accessories to murder and rape.

In Ozu’s world, too, men are oppressive, and violence is present, though less visible because it is inherent in Japanese society’s language and patriarchal structure. In these films, Japanese women struggle for their rights and bring change little by little, without violence, without disrupting human relations, and coping with their pain without inferring pain to others.

The opportunity of a new approach to leadership

On a craftsmanship level, Ozu turns a technical limit into a creative solution. His zen wisdom can inspire leaders who are facing climate change and recurrent economic crises. The idea of never moving the camera came to Ozu after he became aware that he didn’t have the technical means to move the camera in the way he wanted to. So he chose a sustainable approach and turned the economic restrictions into a new, rigorous, and unique cinematic gaze built on the ancient stillness of traditional painting and the origins of cinema.

Another principle of expressive and economic synthesis followed by Ozu is the concept of Mu, emptiness, which is not just any emptiness, but the silent emptiness that precedes idea and presence. There is Mu in the pillow shots, which are the specific transition of Ozu from one scene to another, Mu is the alternative to the classic cross-dissolve, but also represents the stillness of things and spaces waiting to be inhabited by humans. Ozu used to say that there is no possibility of dwelling in a room if the room is not empty before. That is why there are seemingly empty shots in all of his films: they are quiet moments where the audience can inhabit Ozu’s cinematic world and contemplate it, waiting for his characters to show up and for the story to continue. Mu is also the silence that precedes the creative act, and the ideogram on Ozu’s graveyard.
A radical, counterintuitive example in the time of social media.

Mu can inspire an innovative approach to leadership: creating a space where the new can raise, and rise up, according to the beings around. Martin Heidegger expresses a similar principle in his Being and Time: care is the being shining in the things that are tangible.

The world is currently facing a crucial turning point. A political and economic application of Monozukuri and Mu can offer an alternative to dray circularity and logic of unsustainable profit. Workers demand more flexible options and a healthy environment from their companies. Employers can address the Great Resignation trend by evolving the concept of smart working into wise working: pursuing KEI (Key Evolution Indicators) instead of just KPI (Key Performance Indicators). Changemakers and key players can use Monozukuri and Mu as a disruptive and non-destructive process to develop human potential.

Roberta Talarico and Alessandro Avataneo are co-authors of this article. 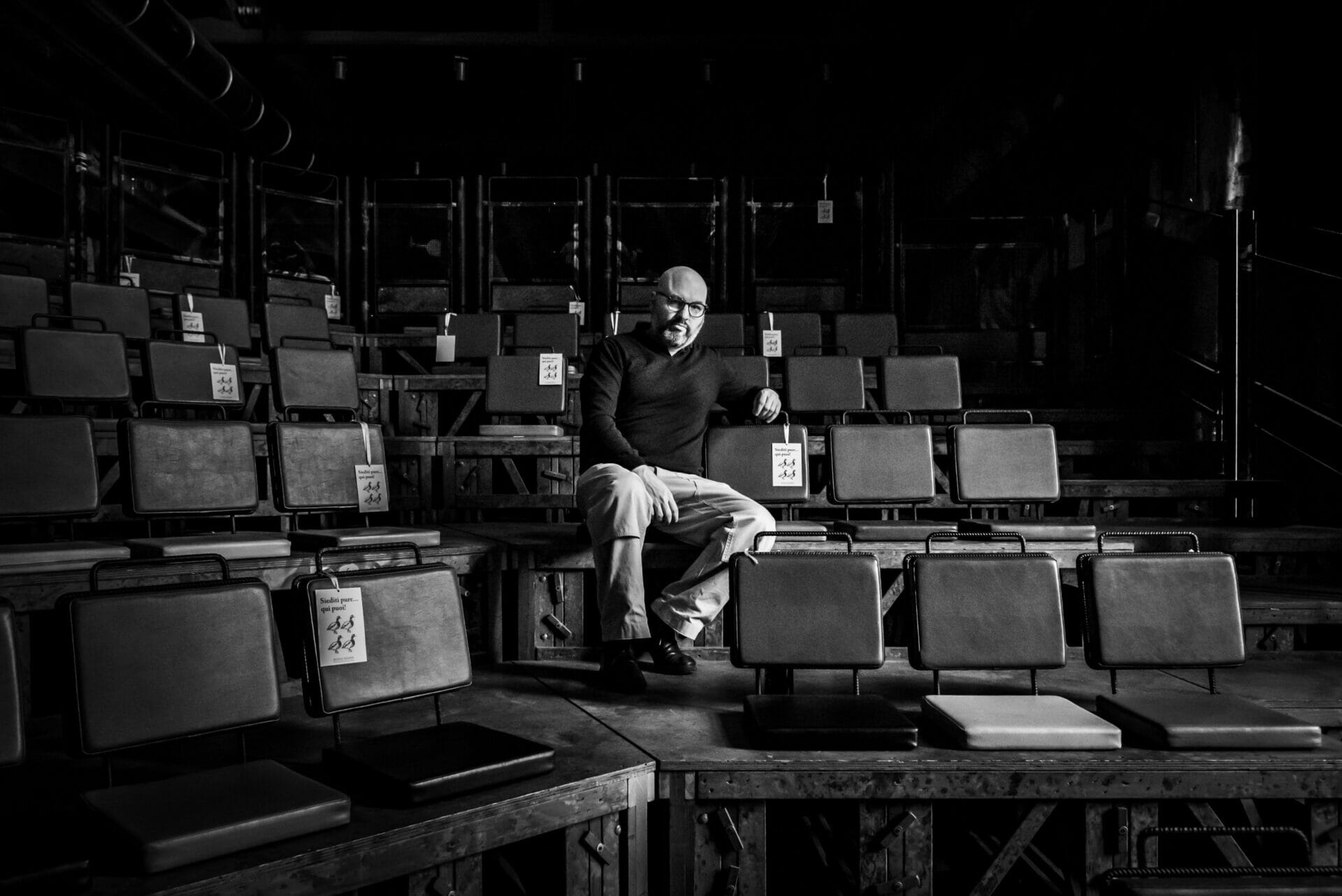