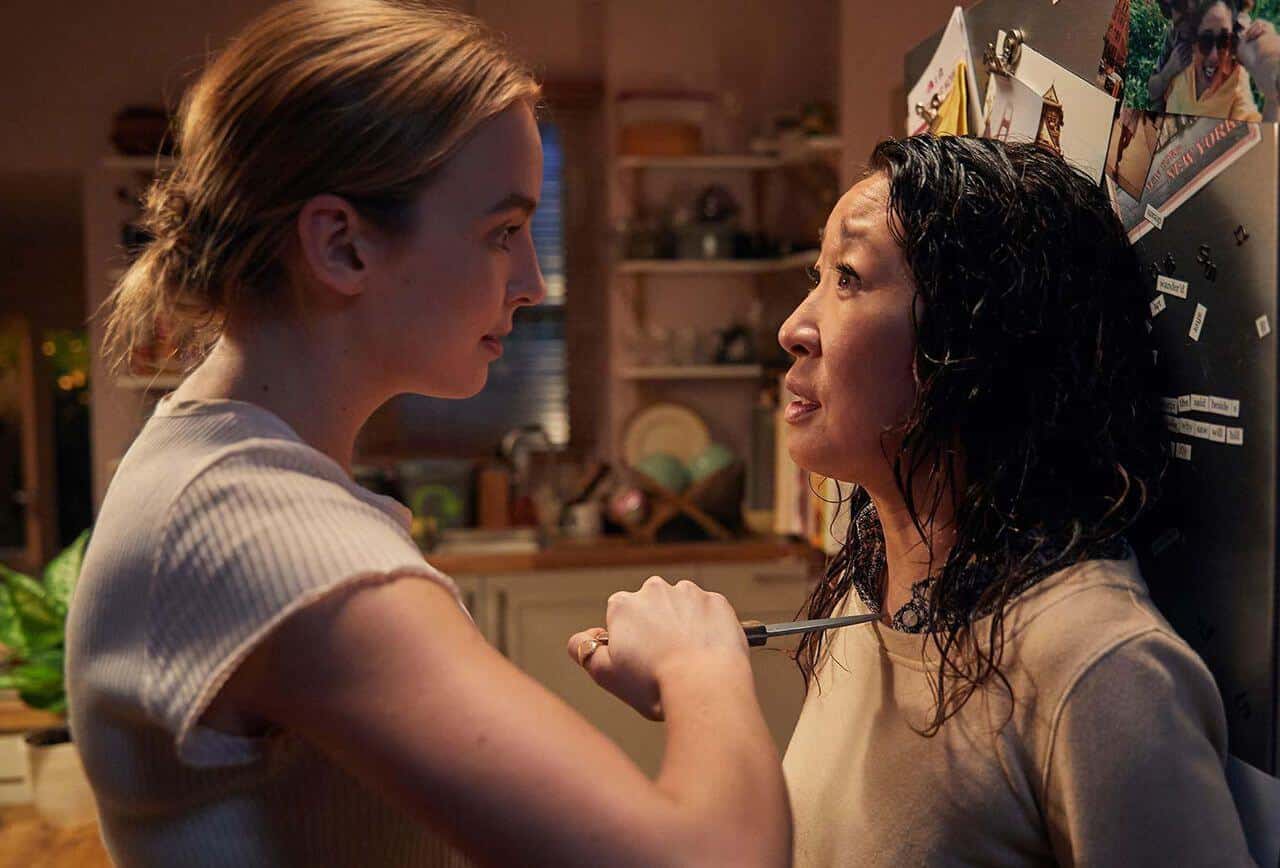 A cat-and-mouse game is a phrase used in English to describe an endless cycle of near capture and repeated escapes. The idiom comes from the behavior of cats, which play with their prey by catching, releasing, and going after it time and time again. The same logic works for the BBC British series, Killing Eve. Its narrative core, indeed, is based on the back and fourth cat and mouse game between the two main characters.

Not a simple spy story

Eve Polastri (Sandra Oh), is a competent but bored officer in MI5, the British domestic security service. She’s fired after a misunderstanding over an assassination gone wrong and then is recruited by MI6, the British foreign intelligence – rivals to MI5. Carolyn Martens (Fiona Shaw, Harry Potter‘s Petunia Dursley) handled her. Her new task is to track down Villanelle (Jodie Comer), a mysterious Russian multi-capable assassin who carries out targeted killings on behalf of The Twelve, a faceless group of worldwide power brokers.

What results from this is a story of mutual obsession, spies, and witty dialogues, that has the power to subvert genres. Unlike James Bond or other spy stories, the viewer won’t find any femme fatale, driven by trauma or revenge. The juxtaposition of different moods, the contrast between a murder scene and the lightness of the main characters, and thus the psychological insights, make Killing Eve unexpected and hard to define. This is part of its allure. The series is based on the Villanelle novels by British writer Luke Jennings. But the director Phoebe Waller-Bridge — also known for the TV show Fleabag — turns it into a mix of drama, thriller, and dark comedy. With her unique and punctual writing, she represents the human dynamic in an irreverent way.

What stands out in this series is the exploration of women’s desires. Waller-Bridge brings it to another level, in order to break stereotypes of feminine behavior. Eve wants to get a more exciting life, Villanelle the power to do whatever she likes. They are looking for a dimension in which they can escape the male’s projection. And so they “say the unsayable, do the undoable.” They carve out the space they deserve, both far from a patriarchal narrative and a women empowerment rhetoric. They are sharp, outspoken, and unaccountably drawn to each other. This cat-and-mouse game is all spiced up by British humor.

Killing Eve as a milestone

In the background of their story of attraction and conflicts, all the other characters move their steps in a series with rhythm, twists, and turns. Thanks to its complexity, Killing Eve has won several nominations and awards. In 2019, in particular, Jodie Comer got Best Lead Actress in a Drama Series at the Emmy Awards. Sandra Oh — known for her Cristina Yang in Grey’s Anatomy — won the Golden Globe as the Best Actress in a TV series, instead. So Killing Eve is not only a cat-and-mouse game, but it also marks an important milestone. For the first time in the entertainment industry, one of the lead actresses in a media production is of Asian descent. Perhaps it will change the narrative and make cultural perspectives more inclusive.