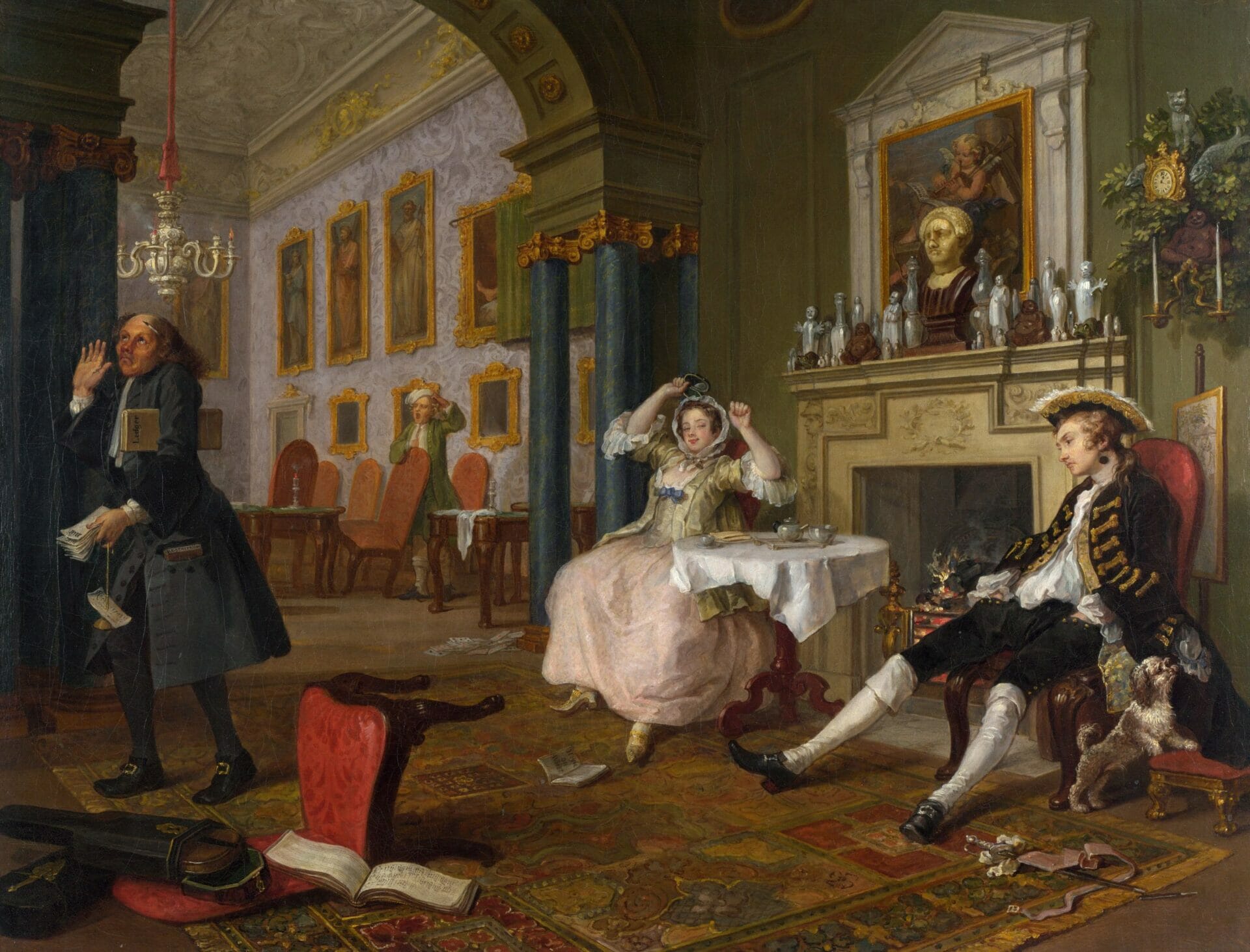 The Tête à Tête painting is part of a series of six canvases that bear the title Marriage A-la- Mode. In the decade before the creation of this series, the painter William Hogarth had turned his disillusioned gaze to other London realities of the first half of the 18th century. He had therefore painted another series dedicated to the career of a prostitute, and the career of a libertine: A Harlot’s Progress and A Rake’s Progress.

His attitude towards the events of the day is openly critical. However, the painter’s negative opinion does not seem to be too judgemental towards the protagonists of his series, but rather towards the society around him, which he sees as corrupt. In his view, it crushes the characters, leading them to make the worst possible choices in life, which lead to squalid conclusions.

These series followed the protagonists from ascent to death, unconsciously anticipating the Hero’s journey stages, identified by anthropologist and comparative mythologist Joseph Campbell during the twentieth century and then adopted in Star Wars. The canvases are full of details that intuitively lead the viewer to understand what is happening and to fill in the gaps in the narrative that lead from one canvas to another.

In front of the two newlyweds, an old and disappointed bureaucrat leaves the room, holding the unpaid bills.  This set of stories inspired Stanley Kubrick for Barry Lyndon, where he openly quoted this painting in a scene. The movie is full of references from other eighteenth-century English painters besides Hogarth, such as Thomas Gainsborough and Joshua Reynolds.

In this case, the scene happens after the little Bryan Patrick Lyndon died falling off his horse. The protagonist is devastated and this feeds his addiction to alcohol and gambling even more. The pose in which Kubrick captures Barry Lyndon is identical to one of the young husbands in the painting. At the same time, other common elements include the fireplace, the upturned chair, and the row of bottles on the cabinet, which in the film acquire more meaning referring to the alcoholism of the protagonist. The atmosphere of derelicts abandoned to vice has been impeccably re-proposed by Kubrick, succeeding in reconstructing the apparently perfect but inherently rotten aristocracy in The Age of Enlightenment, inspired by Hogarth’s paintings.