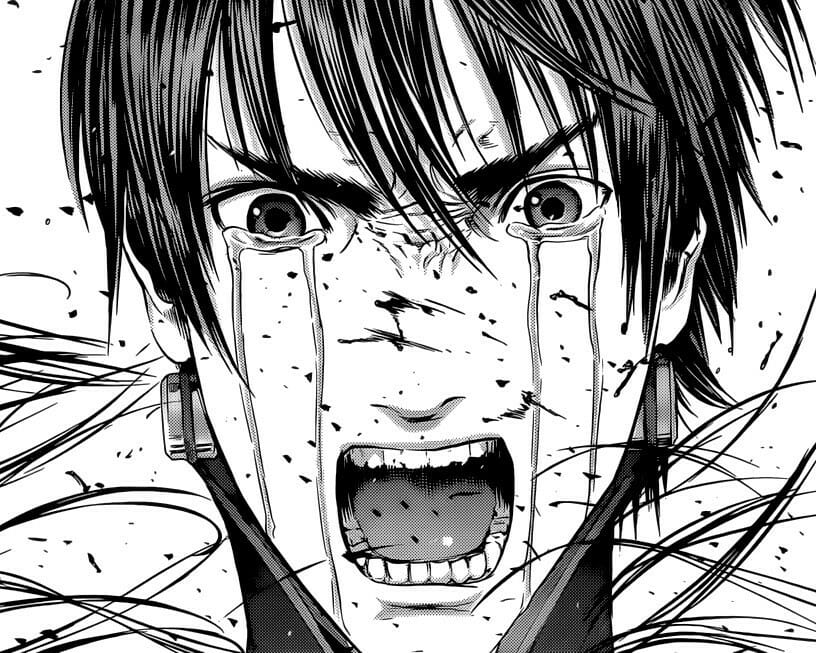 Suppose you die and then wake up in a room with a black sphere, which gives you a different score for doing senseless and super-dangerous missions. Like Gantz characters, you would ask yourself why your life (or death) has turned into a deadly videogame with no meaning.

The popularity of the author Hiroya Oku is often linked to the amount of explicit content of his manga. Both violence and nudity are quite recurrent and his latest work Gigant is further evidence of this. Anyway, Oku’s main work Gantz didn’t reach the 37th volume only thanks to boobs and gore. What starts as a horror/sci-fi story without a clear direction turns out to be a deep insight into how people can find a purpose in these purposeless times.

Violence, 3D modeling and realism: an innovative take on manga

Gantz includes a number of features that marked an innovative and more mature way to write manga. Long before Isayama’s Attack on Titan, Gantz dreadfully played with the life of its characters, giving lots of exciting turning points. Plus, back in 2000 his style, based on 3D modeling for characters and backgrounds, was rather unprecedented. In a few years, other famous authors like Inio Asano (Goodnight Punpun, Solanin) would follow the example. However, the most characteristic feature of Oku’s work is the blending of a realistic setting with horror and sci-fi features. Once the characters find themselves involved in dangerous fights, it’s not that they cheerfully team up to achieve success. The most common reactions in this irrational situation are fear and selfishness and the protagonists are no exception.

Life is a videogame and if you lose you die

The despicable Kei Kurono and the brave Masaru Kato lose their lives saving a homeless guy. However, the afterlife is not what awaits them. Instead, they find out they are still alive, but at the mercy of a highly technological tool, a talking sphere named Gantz which recruits and obliges people to carry out its unreasonable missions. From old people to kids and even animals, Gantz drags any kind of person in and most of them inevitably die. The participants have high-tech equipment – first of all, the iconic suit – and their task is usually to take out some terrifying aliens and in the end they are evaluated by Gantz (and mocked by its silly comments). They can make three choices with the points they’ve scored. They can decide to go back to their normal life, to resurrect another participant, or to get better weapons.

Oku depicts life as a videogame. Apparently, what matters the most is getting a good score. To do so, you need good equipment, solid fighting skills and a fair amount of luck. The author builds up an environment of violence and death where life is worthless and disposable. A hollow existence, where all that matters is completing a task, namely surviving, and the only incentive is fear. Nevertheless, it is exactly there that Kei and the others find their own purpose. If in the beginning, it is all about surviving, later on the point becomes protecting what they care about.

Oku is good at showing every trait of the characters’ personalities, especially the selfish and hypocrite attitudes all have, but usually hide. He does it by using the extreme stress of the missions, but also giving an unsettling look into everyone’s normal life. Thus he manages to give a whole, realistic overview of his characters.

This realism also reflects on his usage of social networks: from time to time, the author shows online comments on the current events of the story. In doing so, he gives the illusion all is happening for real and conveys a sense of superficiality and aggressiveness typical of the internet, especially in front of troubling circumstances.

The highly detailed drawing style enhances all the previous characteristics. The accurate and yet cold, impersonal backgrounds underline the feeling of estrangement while the facial expressions are always lifelike, with an absolute absence of caricatures.

Gantz: videogame scores and the meaning of existence

At first, the plot could seem like an excuse to generate suspense. However, eventually what looked like the work of a sadistic writer will turn out to have an overall sense (…except for some elements, check the Gantz characters’ entry: vampires). Witnessing how easy, unpredictable and senseless can death be, the main characters change their perspective on the value of life. Especially Kei Kurono starts as an unsympathetic guy who only cares about himself to later become a role model with a clear idea of what matters for him. Thus Gantz, even if presents life as a foolish videogame, then shows that is possible to find meaning in one’s existence.

Gantz is one of the best-selling seinen manga of the last few years. Based on the manga, several light novels and spin-offs were published. In 2004 an anime adaptation came out. Three live-action movies were released in 2011 and on Netflix there’s even available a CGI movie (2016).