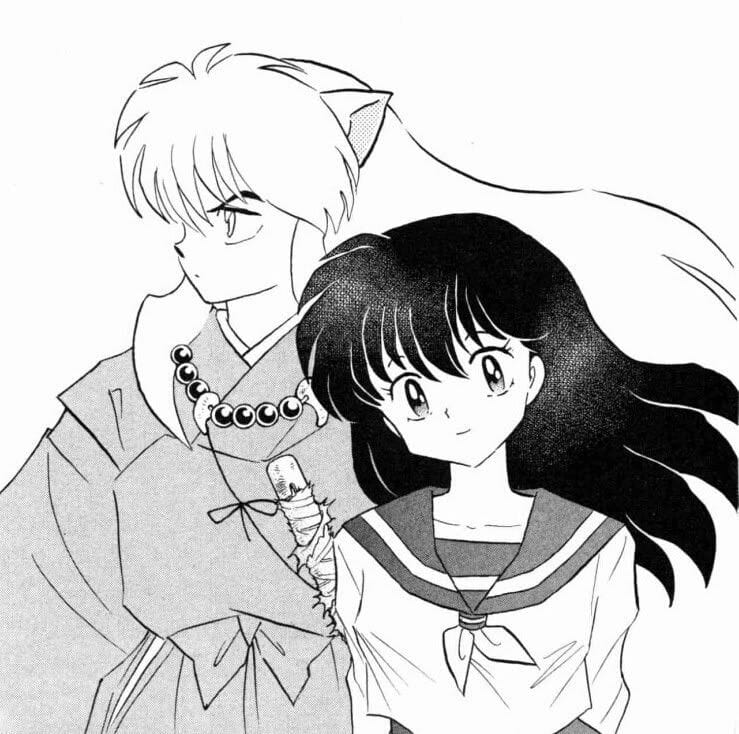 Inuyasha is a winning combination of shonen and shoujo

What would a teenager do if they were able to travel four hundred years backward into the
past, to another world? And what if collaborating with a demon was the only way to stop evil from spreading? This is the premise of Inuyasha: A Feudal Fairy Tale, that takes the reader on a journey through time itself.

Since its debut on Weekly Shonen Sunday in 1996, Rumiko Takahashi‘s longest-running series soon became a fan favorite. Combining modern and ancient, action and romance, the series results in a unique narration that contributed to the popularity of manga overseas.

Folklore influence on a modern tale

Kagome Higurashi is a high school girl whose life changes abruptly on her 15th birthday, when she falls into a well. Through the family’s Shinto shrine she travels to the Sengoku period, a time of turmoil and conflict in Japanese history. Here, a fateful meeting with the half-dog demon Inuyasha will take place. The two join forces to search for the shards of the Seikon jewel, a mystical object with immense power, to prevent it from falling in the wrong hands. On this quest, they will cross paths with unlikely friends as well as fearsome foes, humans and monsters alike.

The influence of mythology is a major component of this story, and heavily contributed to the charm of it. The ancient world where the manga takes place is full of mythological beings from Buddhism, Shintoism and Japanese folklore alike. Such creatures are behind the creation of many characters. From the protagonist himself, who is a dog demon Inugami, to the main antagonist Naraku, a once human yokai (Japanese word for demons or ghosts).

This influence contributed to the uniqueness of the series, striking a balance between tradition and originality that made it memorable. It succeeded in charming Japanese readers as well as Western ones, for whom such creatures represent novelty and wonder. A feat in common with shonen manga Saiyuki, with its Journey to the West inspiration or the Italian comic Monster Allergy, which also shares the theme of a modern protagonist faced with supernatural beings.

The importance of romance in Inuyasha

Despite being defined as a comic aimed at a male readership due to its action-packed story, Inuyasha combines themes of shoujo manga as well. The element of romance is not a subplot but a focus of the story, also thanks to Kikyo’s character. Guardian of jewel, she and the half-demon had fallen in love, but were tricked by Naraku into fighting one another. A clash that ultimately led to Kikyo’s death and Inuyasha’s imprisonment, 50 years before Kagome’s arrival.

The loss and return from the death of his first love deeply shapes the character of Inuyasha. A change which, in turn, impacts the relationship between him and Kagome. The two women represent the past and present respectively, and the struggle of choosing between them embodies the importance of overcoming love lost. Coming to terms with it is a key move forward and grows, just like the protagonist does. Love, even more so during the conflict, becomes a strength – as portrayed in the novel The Song of Achilles.

By introducing similar themes, author Rumiko Takahashi managed to make her story appealing in the eyes of a much larger audience, including – but not limited to – male readers. In fact, she became quite the anomaly in the manga industry for being a woman writing for a boys’ magazine. She wrote mainly comedies, like Lamù and Ranma ½, but with Inuyasha her work took a completely new direction. By updating folklore for a modern audience, she captured the interest of all kinds of readers around the world.

Thanks to the boom of anime, Inuyasha had the occasion to find its way to the Western world. Published in America by Viz Media, the animated series’ potential soon caught the eye of the programming block Adult Swim. And it did so at the perfect time, as well. Airing in 2002, it met an audience that had been only recently introduced to the genre and that was eager for more. With its engaging epic tale it gained mainstream attention, as would Neon Genesis Evangelion in the following year. Along with Digimon, it was one of the first series to popularize the Isekai genre (travel to another world) outside of Japan. A trend that became even more popular later on with works like Dorohedoro, that takes place between two worlds.

Thanks to a compelling story, in-depth characters and a unique spin on tropes, Rumiko Takahashi had managed once again to create a series that resonated with readers and viewers alike. Inuyasha is a mature work and the synthesis of its author’s style; combining her iconic comical flair and unique characters with the action and charm of the historical-fantasy genre. The manga won the Shogakukan Prize for best shonen in 2002 and sold over 50 million copies worldwide.