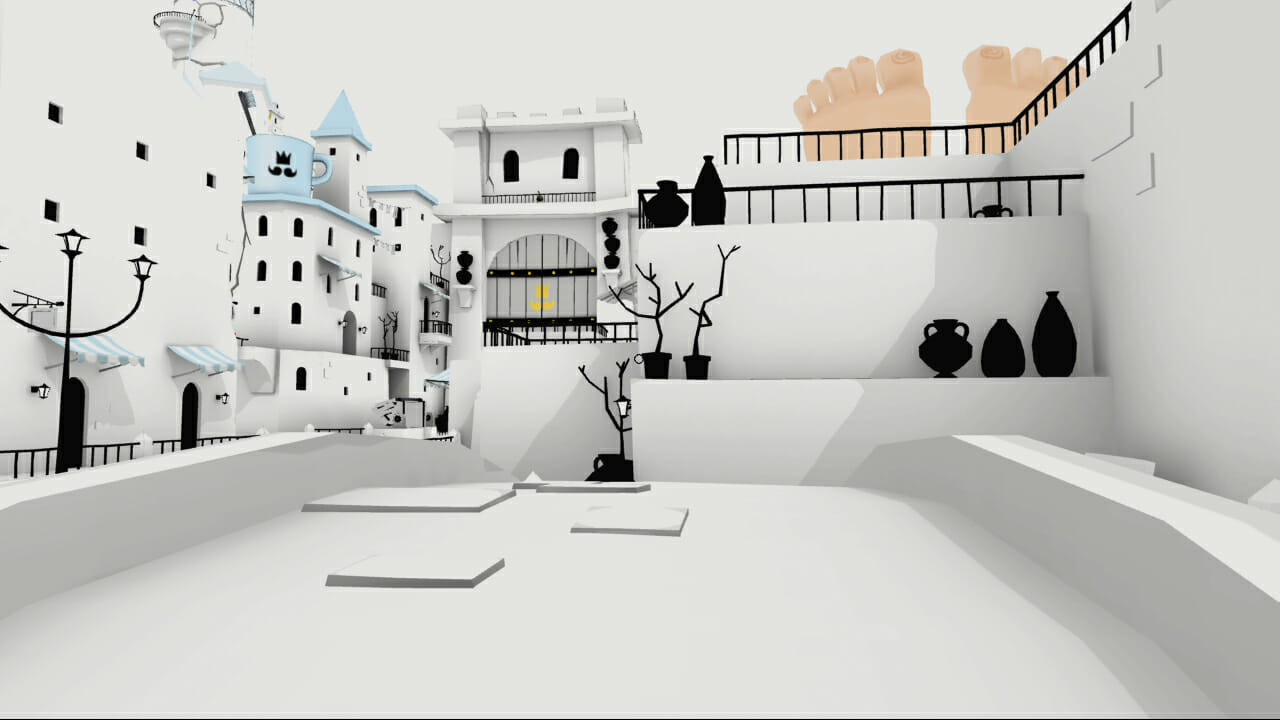 Monroe’s mother had always been much better at starting things than finishing them. When she died she left behind over 300 canvases, not one of them finished. Along with Monroe who felt pretty unfinished himself. The orphanage allowed him to keep only one painting. And so he chose the unfinished swan that had always been his mother’s favorite.

The Unfinished Swan was developed by Giant Sparrow (What Remains of Edith Finch) and published by Annapurna Interactive (Ashen, Outer Wilds, Journey) and Sony Interactive Entertainment. It is a first-person puzzle and platform indie game released in October 2012.

The player takes the role of Monroe, a child determined to find the swan that escaped from his mother’s unfinished painting. The entire adventure takes place in a vast abandoned kingdom. Monroe will discover and explore it, armed with a silver paintbrush, following the swan’s tracks. Only the paint the protagonist throws can make the game world tangible; just a white world, devoid of any nuances, surrounds Monroe.

But that night he woke up to find the swan had disappeared. So he took his mother’s silver paintbrush, and followed the footprints into a little door he hadn’t seen before…

The Unfinished Swan presents itself like a fairytale divided into chapters. But in this case, the pages of the book are completely white.

The King was young, arrogant and amazingly talented. He was convinced no color existed that was good enough for his garden, so he left it white.

A completely white screen is the first thing the player sees. No loading to wait for. With a
simple click of the mouse, the protagonist can throw a black paintball that splashes on the
ground. This suggests that a game world actually exists and the player can move across it:
it’s just invisible. The only weapon little Monroe has is a paintbrush, to make everything visible.

The Unfinished Swan is graphically simple, but the visual aspect characterizes this game the most. Even the sound aspect is polished, with fitting music and an immersive sound design that is useful to suggest where Monroe is and to define the space around him.

The gameplay mechanics that support the entire title are as simple as they are original. Thanks to Monroe everything takes shape and amid tridimensionality, moving step by step, launch after launch.

A child in a changing world

The Unfinished Swan immerses and intrigues the player on different layers: it is not just about exploration but also the search and the discovery of the game world. To explore it, Monroe must first perceive it and make it alive. This unique type of gameplay thus offers a different experience to each player, who will only see the parts of the environment that stains when his paint splashes.

Proceeding with the adventure, the player can move in larger spaces with more freedom to explore. The king’s realm won’t be in white for the whole of Monroe’s adventure. It rather changes and evolves continuously, effectively making itself the true protagonist of the game. The setting pushes Monroe to learn new dynamics, to look around and admire new landscapes.

The Unfinished Swan manages to reawaken the player’s inner child, surprised about new simple elements like the appearance of shadows, outlines, or colors.

Unlike his nicely trimmed hedge maze the vines refused to stay where the King wanted them. He ordered his subjects to pull up every vine they saw, but the people were getting tired of the King’s endless decrees. So they secretly began watering the vines whenever the King wasn’t looking.

As often happens in indie games, a rich technical aspect gives the way to a small but extremely well-finished title. The variety of ideas the game proposes is admirable, and each of these insights would have the potential to sustain an entire video game on its own.

The variety of The Unfinished Swan can be found not just visually, but also in the interaction with the environment; what if Monroe can throw water instead of paint, or what if the water attracts some green vines Monroe can use to climb?

The game takes his level design to a higher level by the fact that the player has to come across that staircase, in that door, in that alley, coloring and looking around. The map gives Monroe an elevated view from which to observe the road he has travelled and the part of the world he has colored. It is a great source of satisfaction for the player, who feels that the adventure is going on and that he’s having a direct impact on what he had around him.

The platforming and puzzle elements become more numerous as the player progresses through the story, with simple puzzles to solve and paths to plan. A further challenge is to find the balloons, colorful collectibles that hide from the less curious players. They are also the in-game currency; the player can purchase various skills to improve Monroe’s launches and provide a varied gaming experience.

The title stands out strongly from the video game scene, but despite its atypical soul it is possible to find part of its atmosphere in Maquette; in this other game, published by Annapurna Interactive, the player is faced with simple puzzles but surrounded by a very polished context in artistic terms.

The Unfinished Swan is a fairy tale that manages to delicately express the strong unease of a child: the feeling of incompleteness caused by his mother’s passing. The king in the story lives a continuous drama, chasing completeness that seems never to arrive.

The story of the king is nothing but the epic, fantasy, and childlike representation of Monroe’s childhood, unfairly amputated of fundamental support, and without which he feels as empty as a blank sheet of paper. The painting of the swan left unfinished by his mother represents Monroe’s soul, who must rethink his entire past by overcoming seemingly insurmountable obstacles. All to complete that painting.

And that night, even though he was very tired, Monroe did something that would have made his mother very happy. He painted. 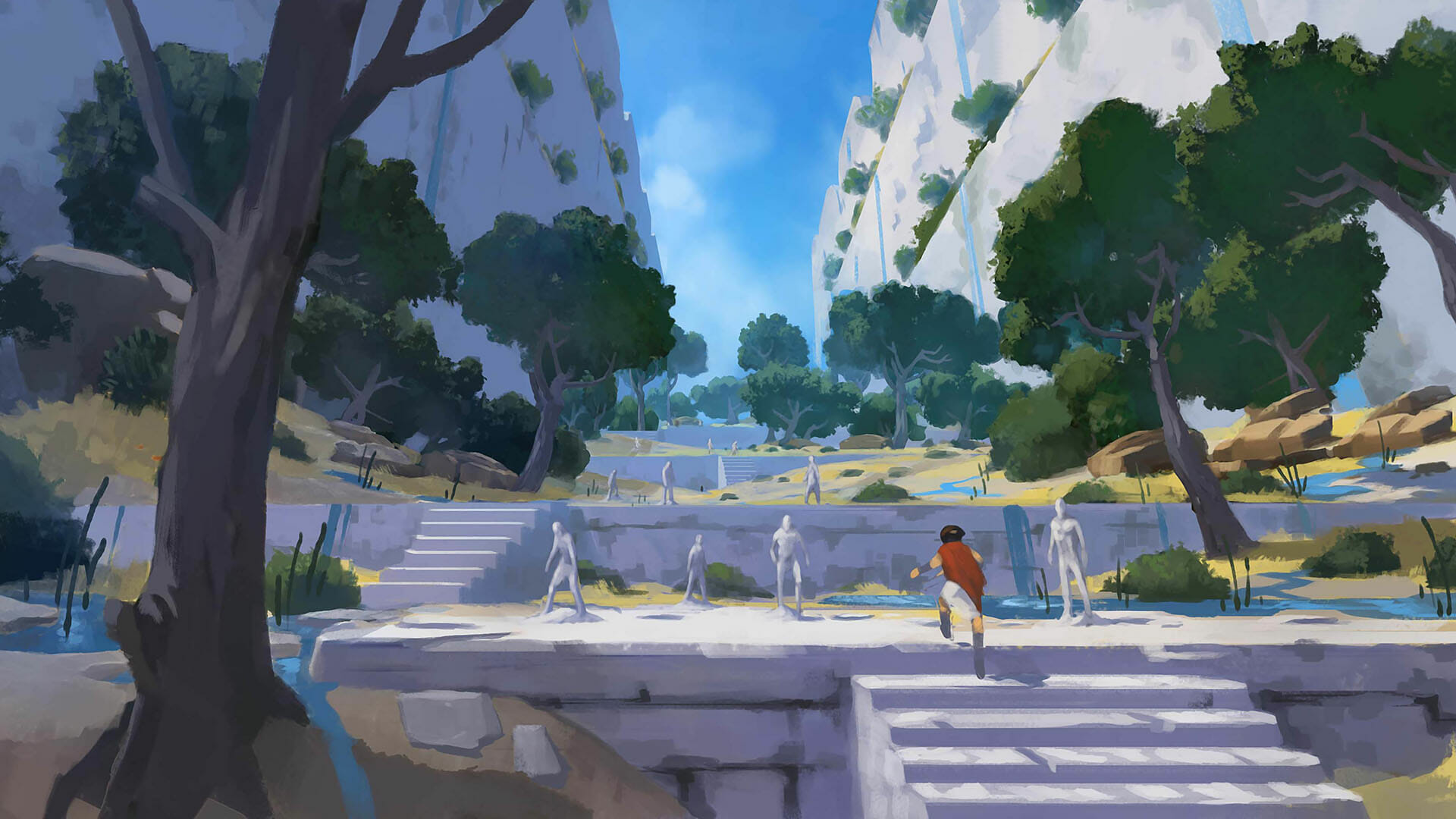 RiME | An indie gem that speaks to the soul

RiME | An indie gem that speaks to the soul